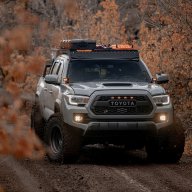 UnAverage Joe said:
I'm not sure about the military aspect but I would think it would still work. When I was in my truck earlier though...i noticed that my seat mounts/ brackets or whatever is side and side and not front and back like shown in the sketch above. Are some tacoma seats mounted different?
Click to expand...

I think the seats are mounted the same, but I am using a seatjacker with MMP for extra mounting options there. Normally you only have the two bolts, this gives a flat panel that works with nylock, ram diamonds, molle accessories etc..
Check out more on Instagram @cj.overland​

nickyreno said:
Why not just run a spacer between the seat jacker and the MMP?
Click to expand...

I was thinking about that, but I only really need the change for the handgun.. everything else I plan to mount there I'd prefer to be more tucked away. The spacer would require a 1.5" ish push forward and about 3.5" up leaving a pretty gaudy spacer/riser on each side. If this works out it would be much cheaper, maintain adjustability, and be lower profile overall. If I'd doesn't work though, that idea would be much more rigid and would be a fine fall back.
Check out more on Instagram @cj.overland​ 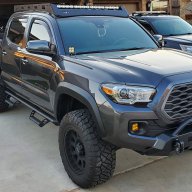 Well keep me posted on what you finalize!

Got the ram balls in andddd got hasty. Instead of waiting for my printer filament to show up in the mail, I just made a metal adapter plate. Didn't give me too much fuss.

It mostly works. I have a 3" arm coming instead of a 2", but the problem is all the weight on one side is creating somewhat of a fulcrum and it's able to exert more force than just the weight of the gun.

So the result is that for normal driving it holds fine, but on larger bumps it angles down to the floor until the holster touches. Still within reach and away from legs, but not quite what I was hoping. I think I'll order a 1.5" ball instead of the 1" as the rated capacity is doubled. 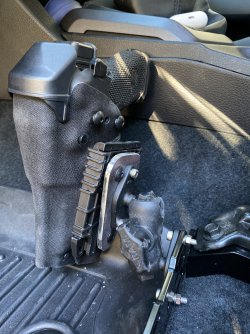 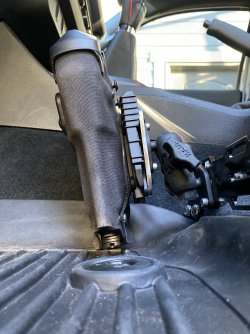 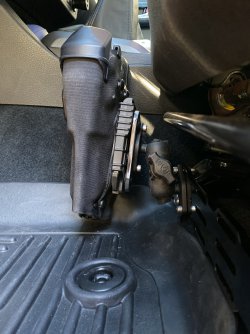 Last edited: May 28, 2020
Check out more on Instagram @cj.overland​
You must log in or register to reply here.
Top Bottom