I can't believe it but we're in our third year of doing Rig of the Month!

I know I enjoy the monthly contest and I think you guys do too. However, some members have been entering the contest since the beginning and still haven't won. On the flip side, a few members have won more than once (which is fine and impressive).

or 3 times but I'm not pointing any fingers @taco.hog

So, since we're starting a fresh year, I decided to make a small change to the contest terms:

Instead of being eligible to win 6 months after the last time you won, you can now only win once in a calendar year. Also, because I don't want to deplete the variety of photos submitted as the year goes on, I'm now encouraging previous winners to still submit a photo every month as a "for fun" submission. Your "for fun" submission can still receive votes, it just won't be eligible for the win.

Lastly, since the submission terms were modified, the previous 6 month cooldown time is defunct for everyone, meaning all members can enter January's contest, regardless of how recently you won in 2021. 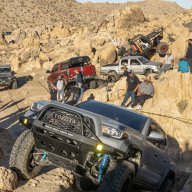 But this month has a photo theme; submit a photo of your truck from when you bought it (or shortly after while it was stock, if you didn't take a photo immediately).

Tacoma3G calendar for 2022 in the works!!! After a few years of wanting to do this, we finally are. Paige is working on it now and I'll have the full information posted soon.
Last edited: Friday at 11:34 AM
Share:
Facebook Twitter Reddit Email Share Link