Figured I'd start a thread on the mods we're doing to my wife's '17 DCSB TRD OR 4x4. The truck is her DD here in Houston, and she commutes from Katy (far west side of Houston) to Clear Lake (bay area) for school. The truck isn't the most sensible commuter, but it's what she wanted, and we won't live in this 'wheeling wasteland forever.

So, we actually started out with a very early '17 DCSB TRD OR 4x4 in Inferno. Then, on our way back to Houston from NOLA last New Year's Eve, this happened. 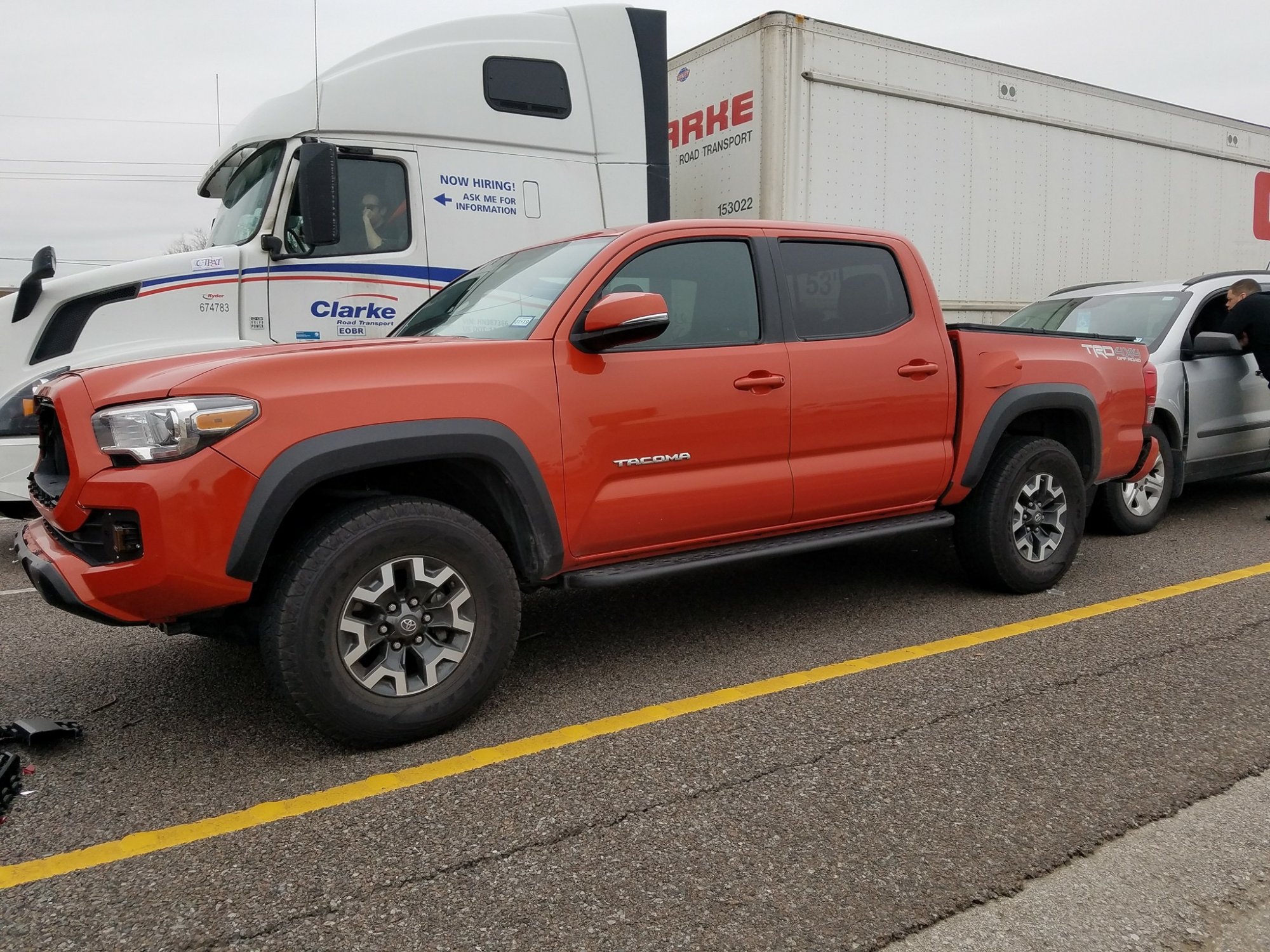 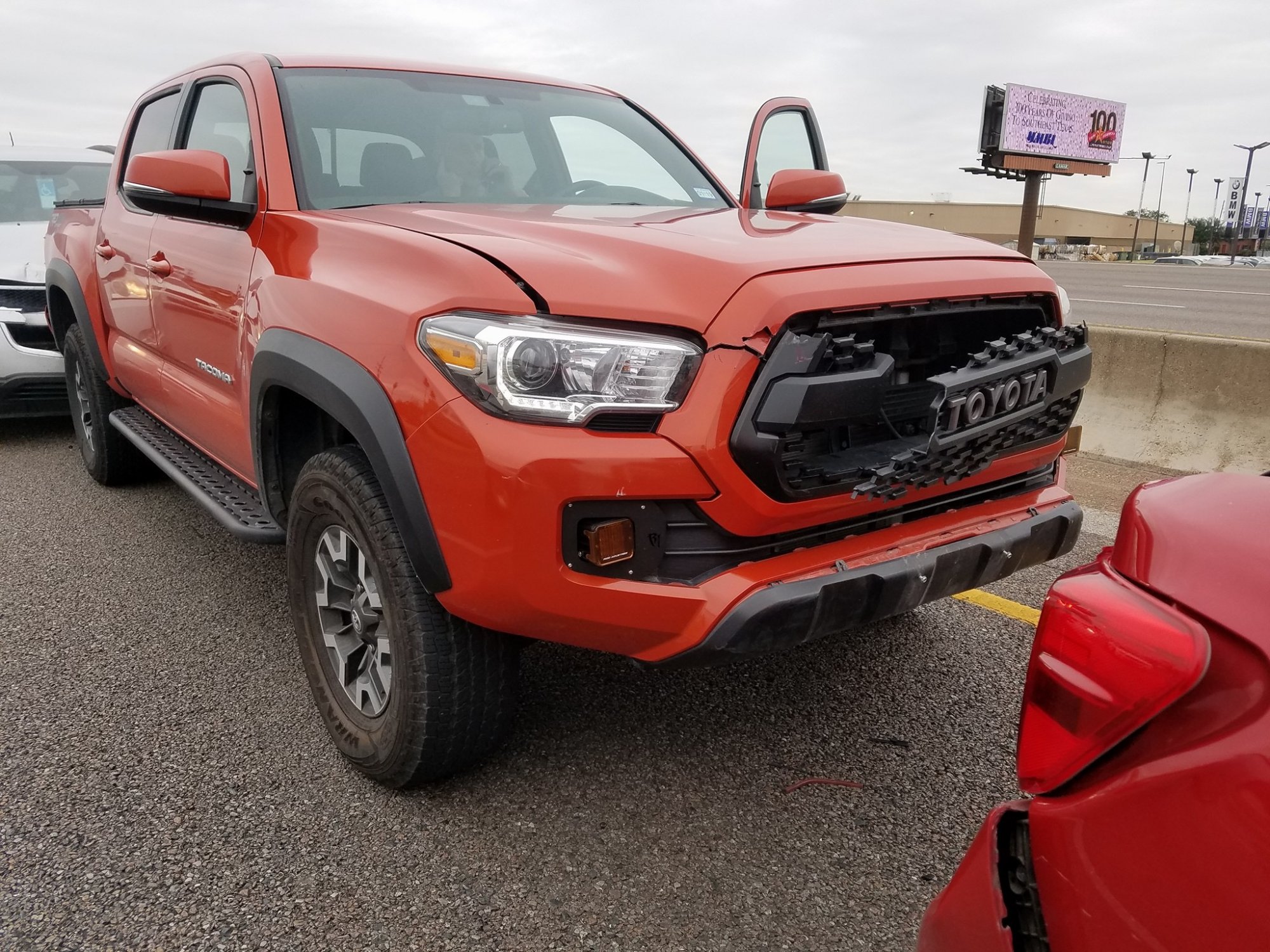 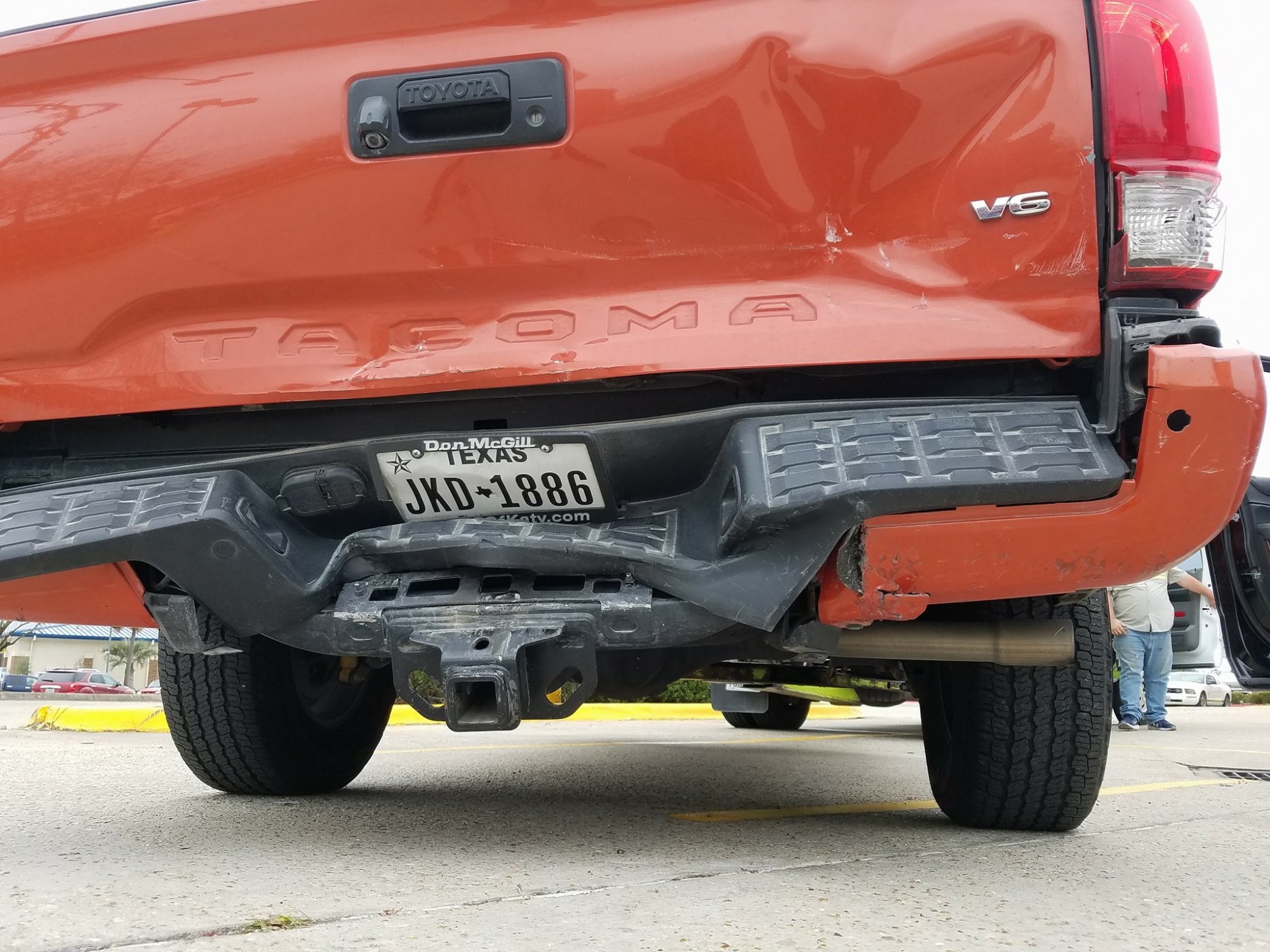 I'm actually really happy we hadn't gotten too far into modding that one. Once they pulled the bed to begin repairs, we quickly got a call from the adjuster that the truck would be totaled. I was able to pull the Shrockworks rocker guards and Rigid driving lights off the truck before turning it over to insurance.

So, we quickly bought this one: 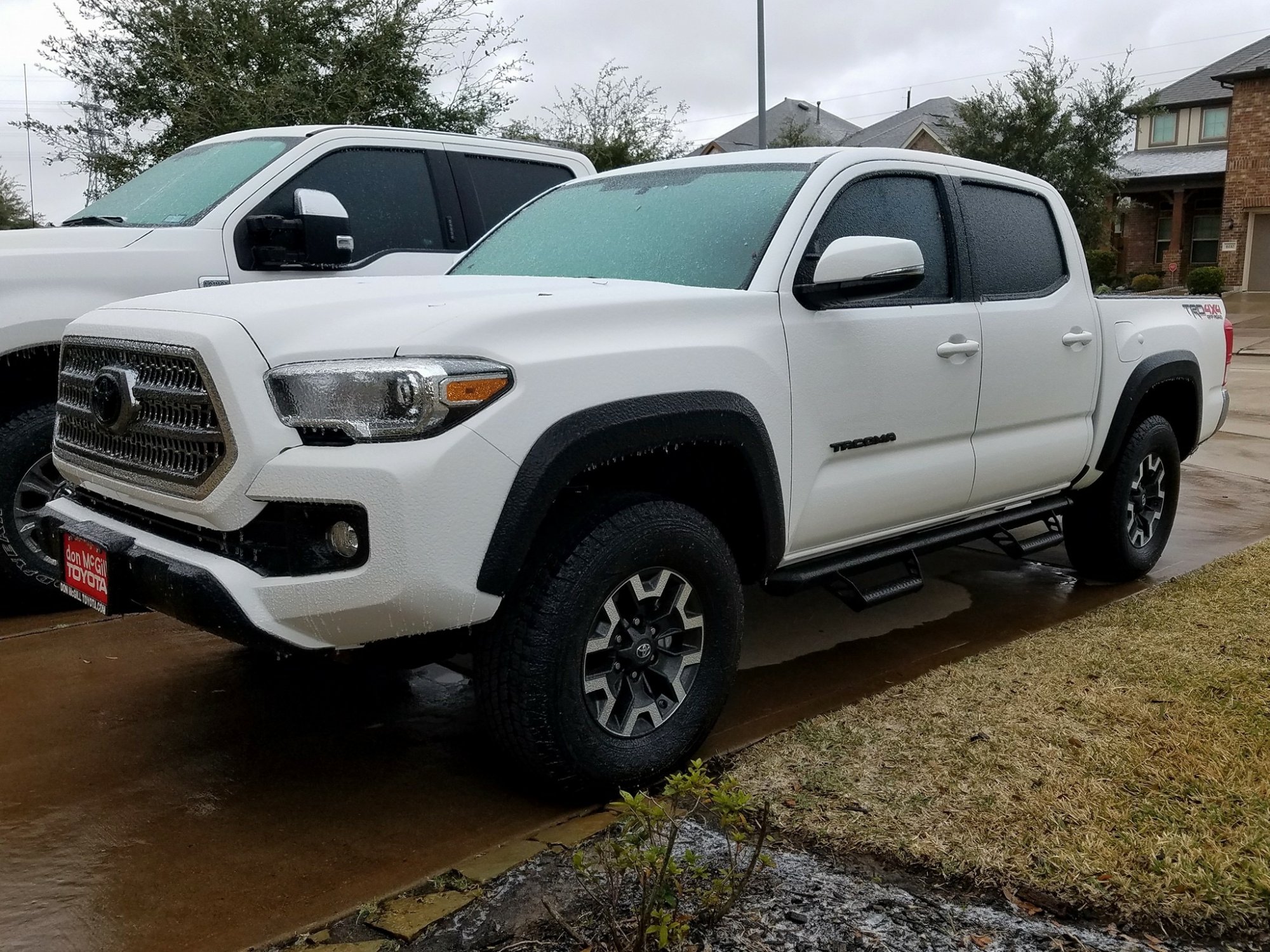 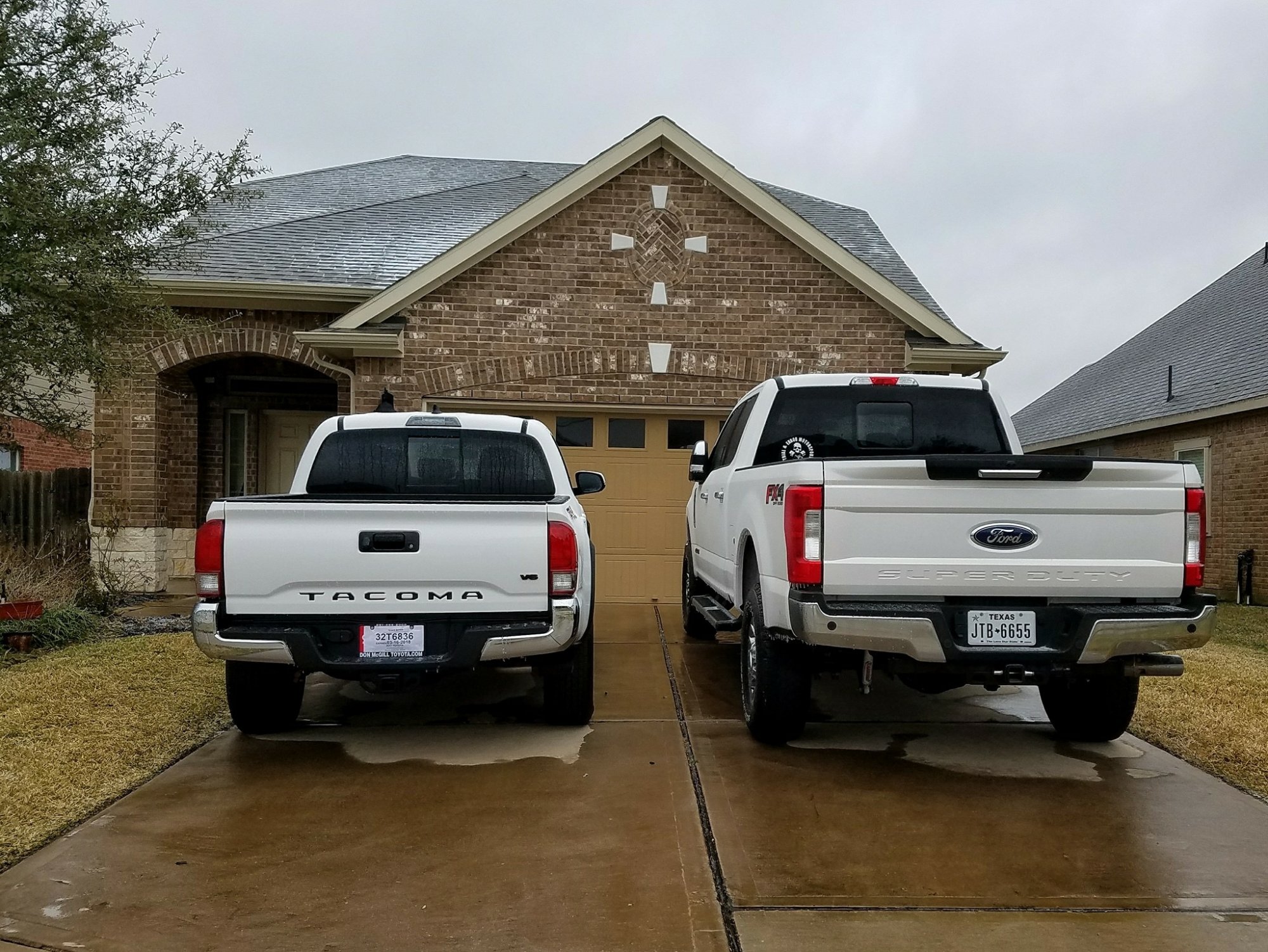 Within a week, the suspension, wheels, and tires were on order through our buddy Dave at BRAVE Motorsports here in Houston. Took ADS awhile to build the shocks, but we ended up with the following: 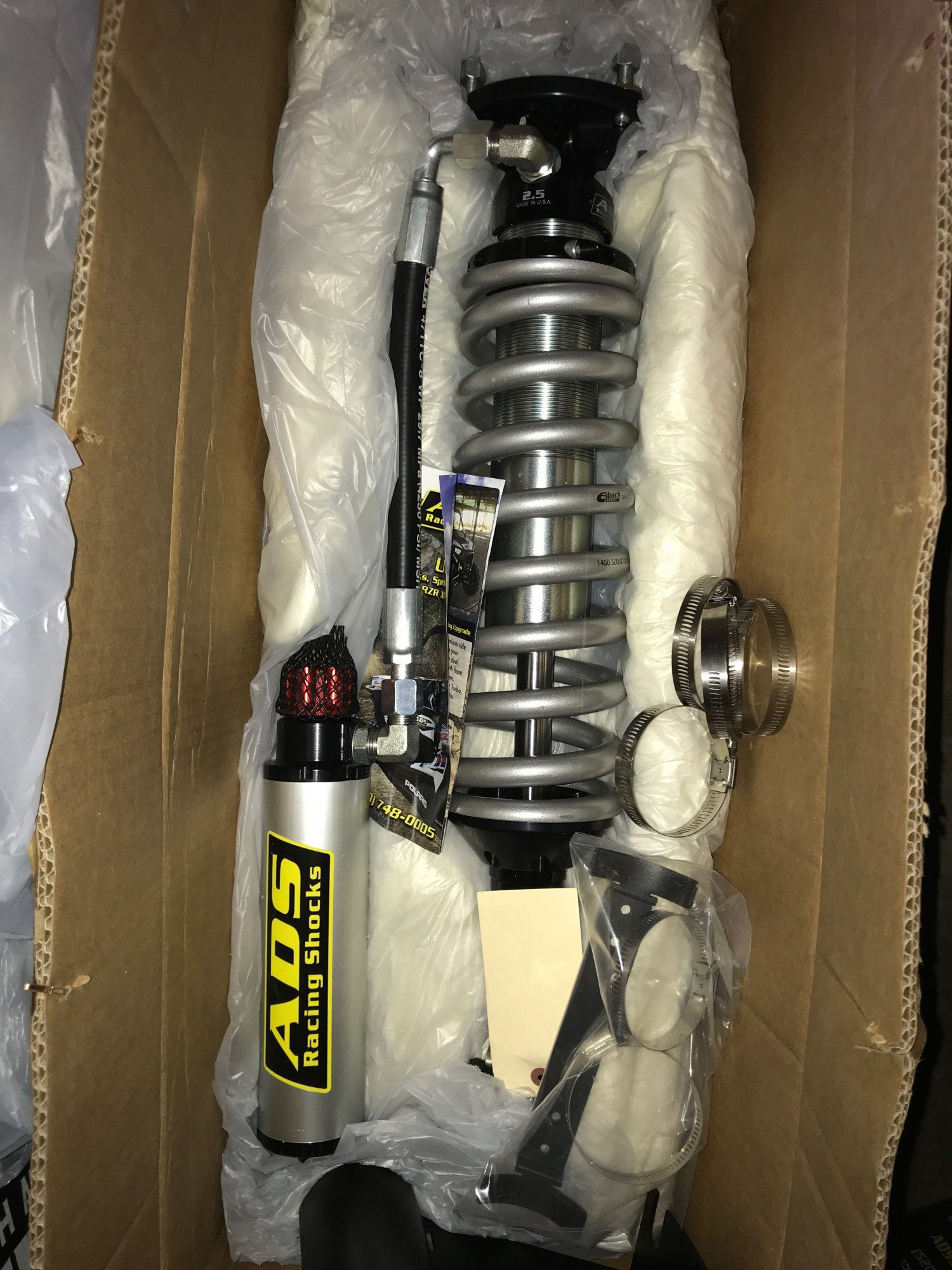 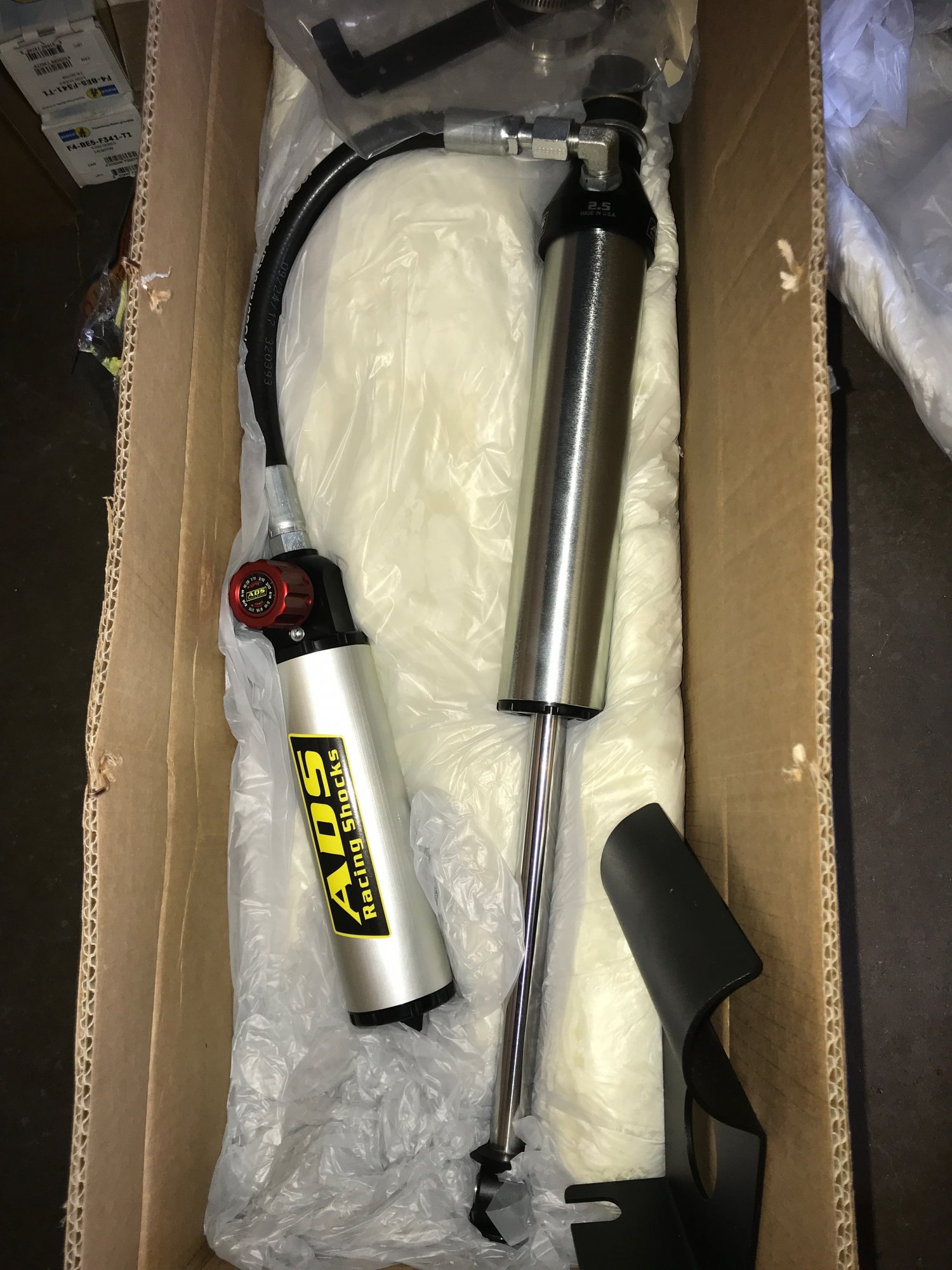 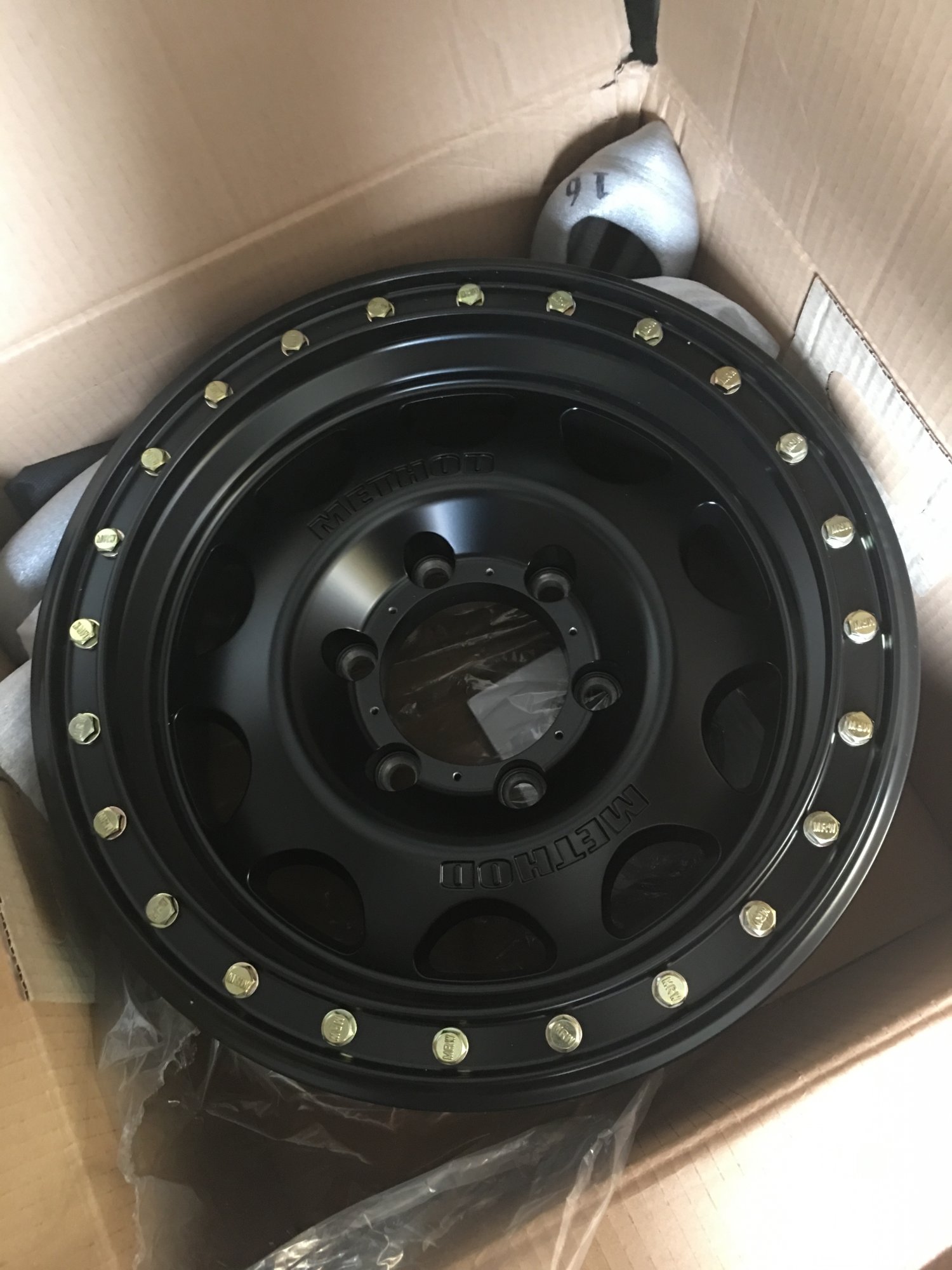 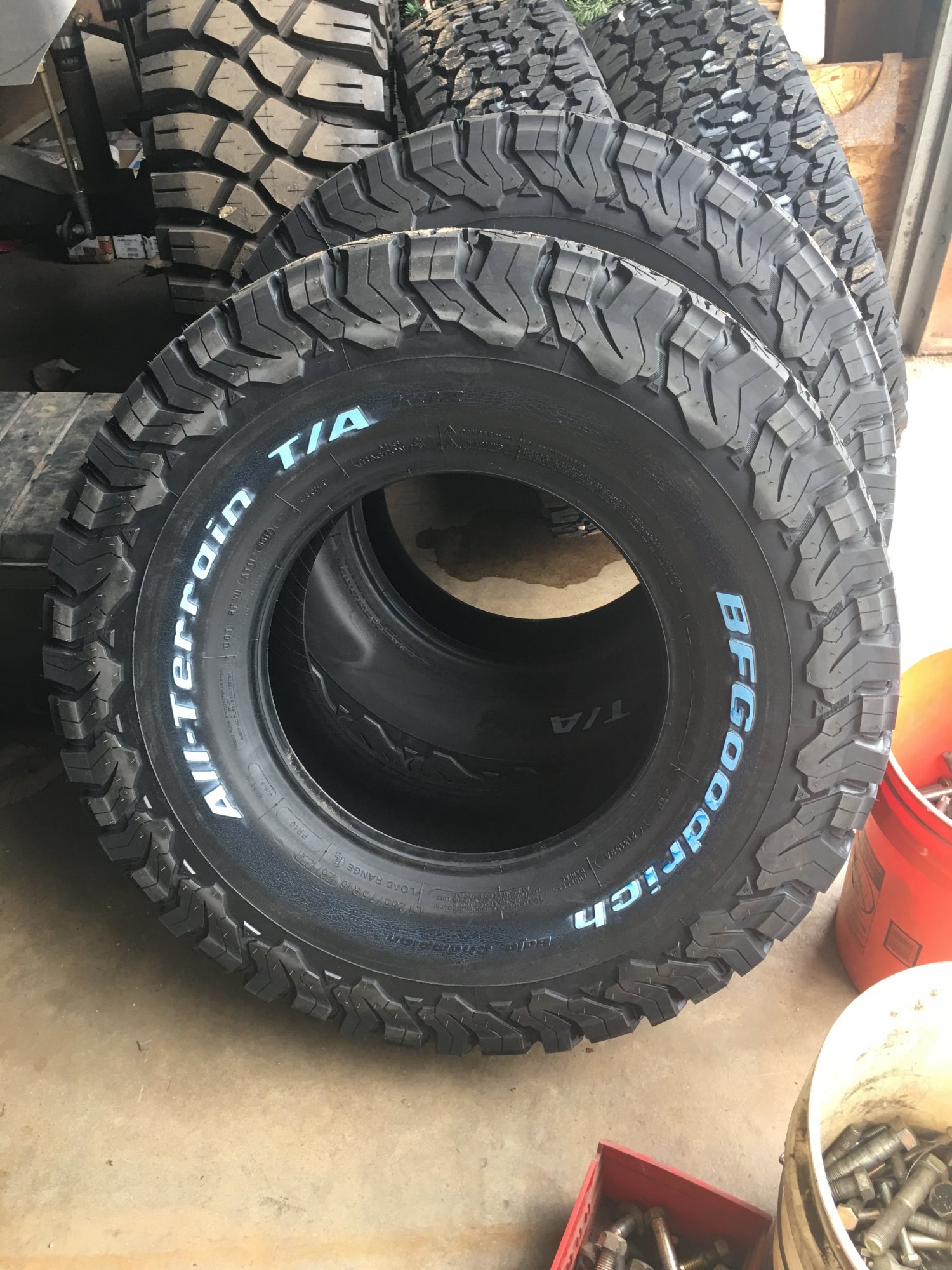 I'm a huge BFG fan, having beat the living hell out of a set of 37" KM2s on our two-door Jeep Wrangler, and now running 37" blue label Krawlers on it. Not shown: Total Chaos heim joint CAs, Icon add-a-leaf, Toy Tec u-bolt flip.

Based on a year's worth of driving the Inferno truck, and my utter disgust with its auto trans, I knew a re-gear would be in order, but we decided to get the first round of parts on the truck first. So here's how that looked: 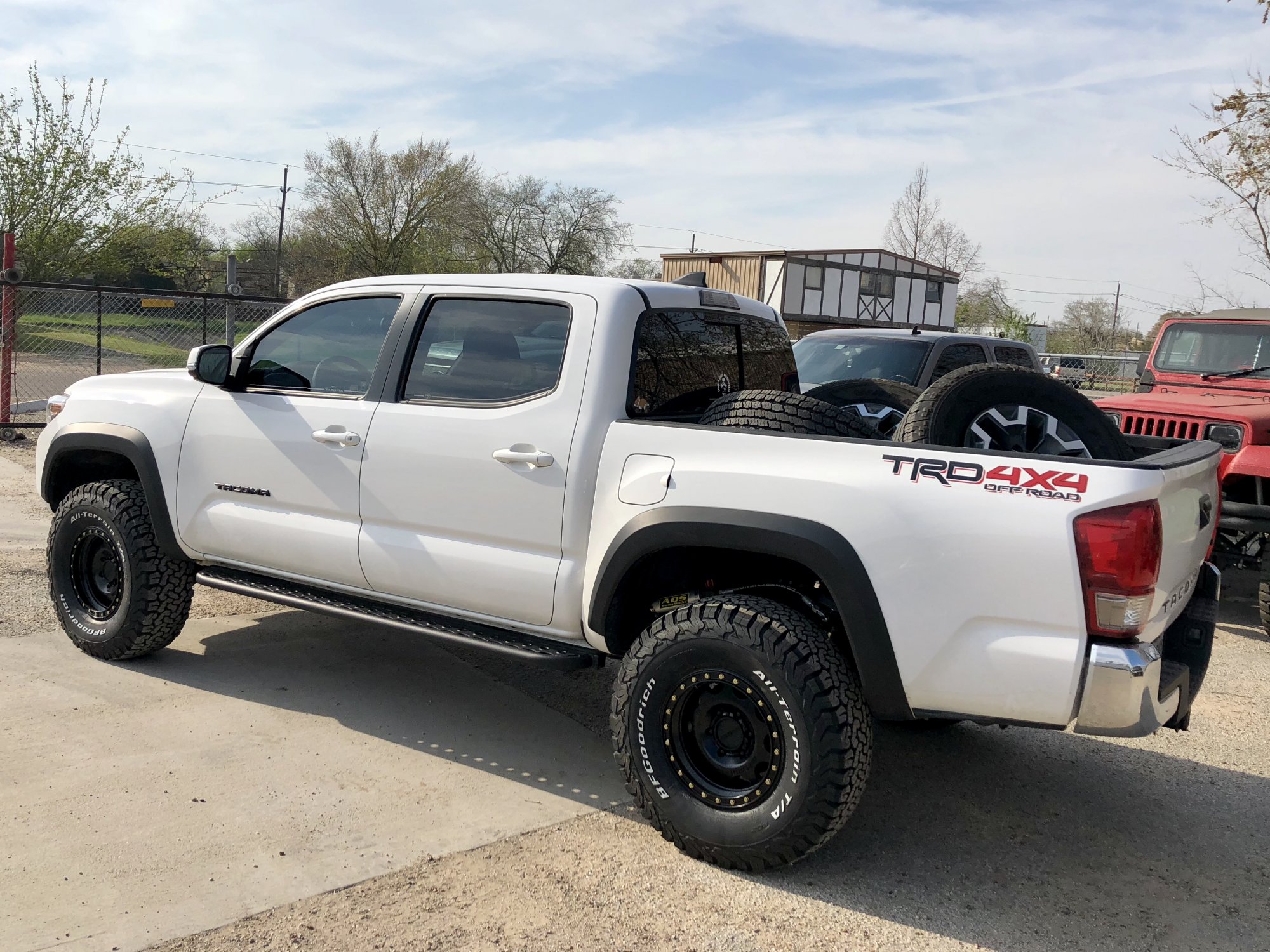 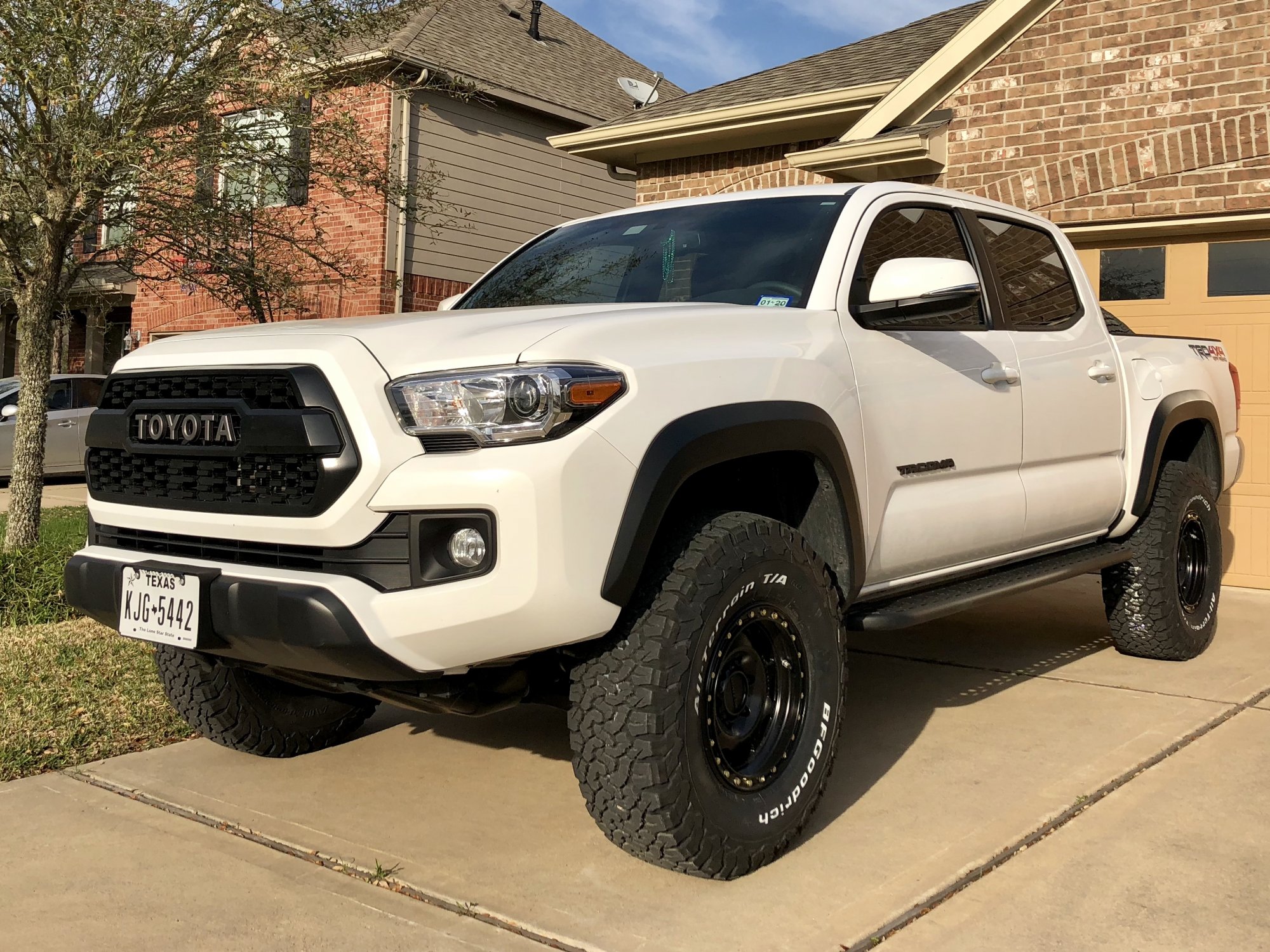 I do a lot of my own wrenching, but Dave is a friend, and one of the most talented fabricators I know, so we turned the truck over to him for the install. He also installed the Shrockworks rocker guards from the previous truck, and did the CMC.

We got the truck back on a Friday evening, Saturday morning we left to go camping in Big Bend Ranch State Park. 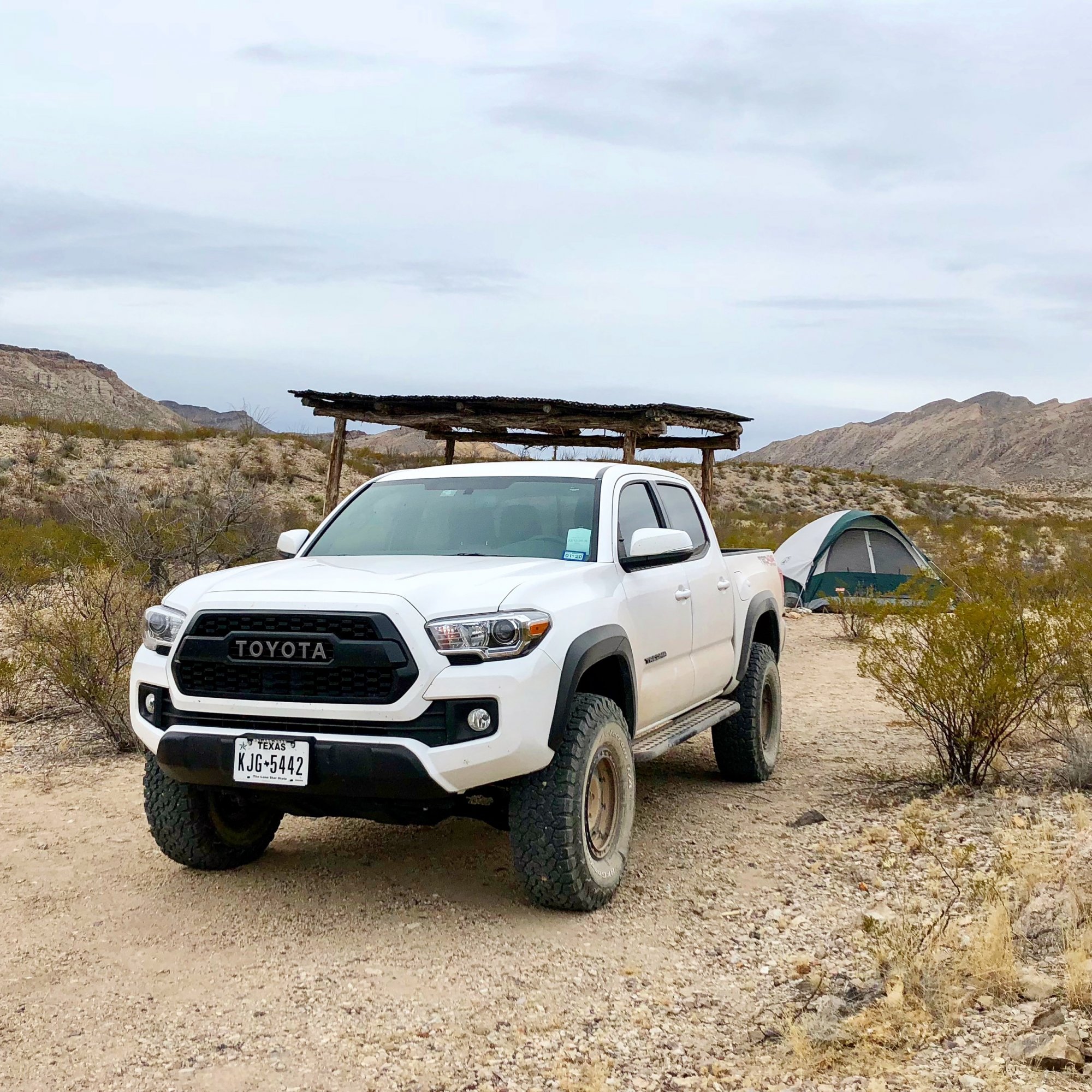 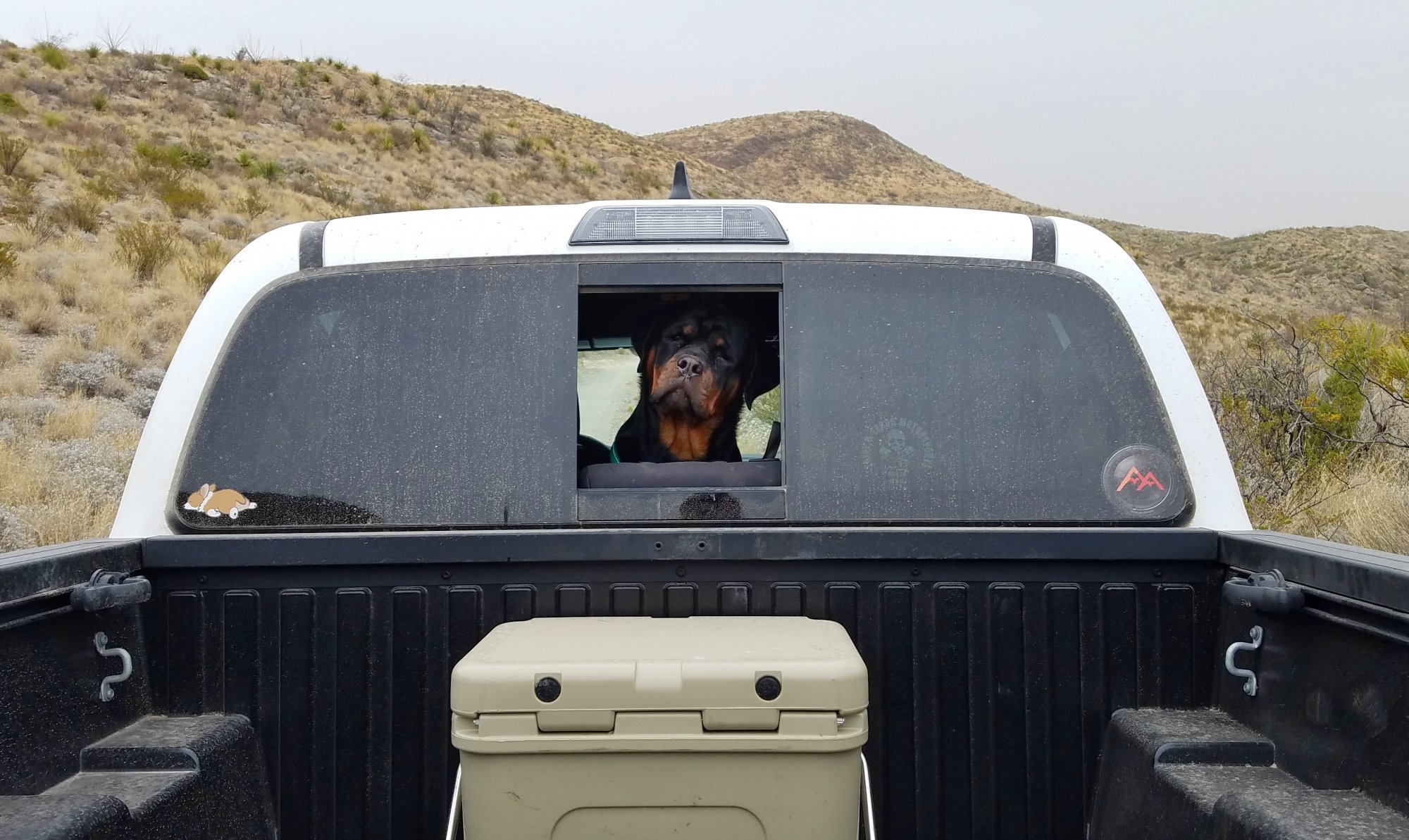 The truck performed exceptionally well, though BBRSP doesn't have much in the way of true 'wheeling.

After our round-trip to far west TX and back, while quite surprised by the truck's drivability with 33s and stock gears, we pulled the trigger on Nitro 4.88s, a front ARB air locker (I mean, since the front diff was going to be opened up anyway) and the ARB high output twin compressor. No pics of the install, but one of Dave's guys fabbed-up a bracket to mount the compressor. 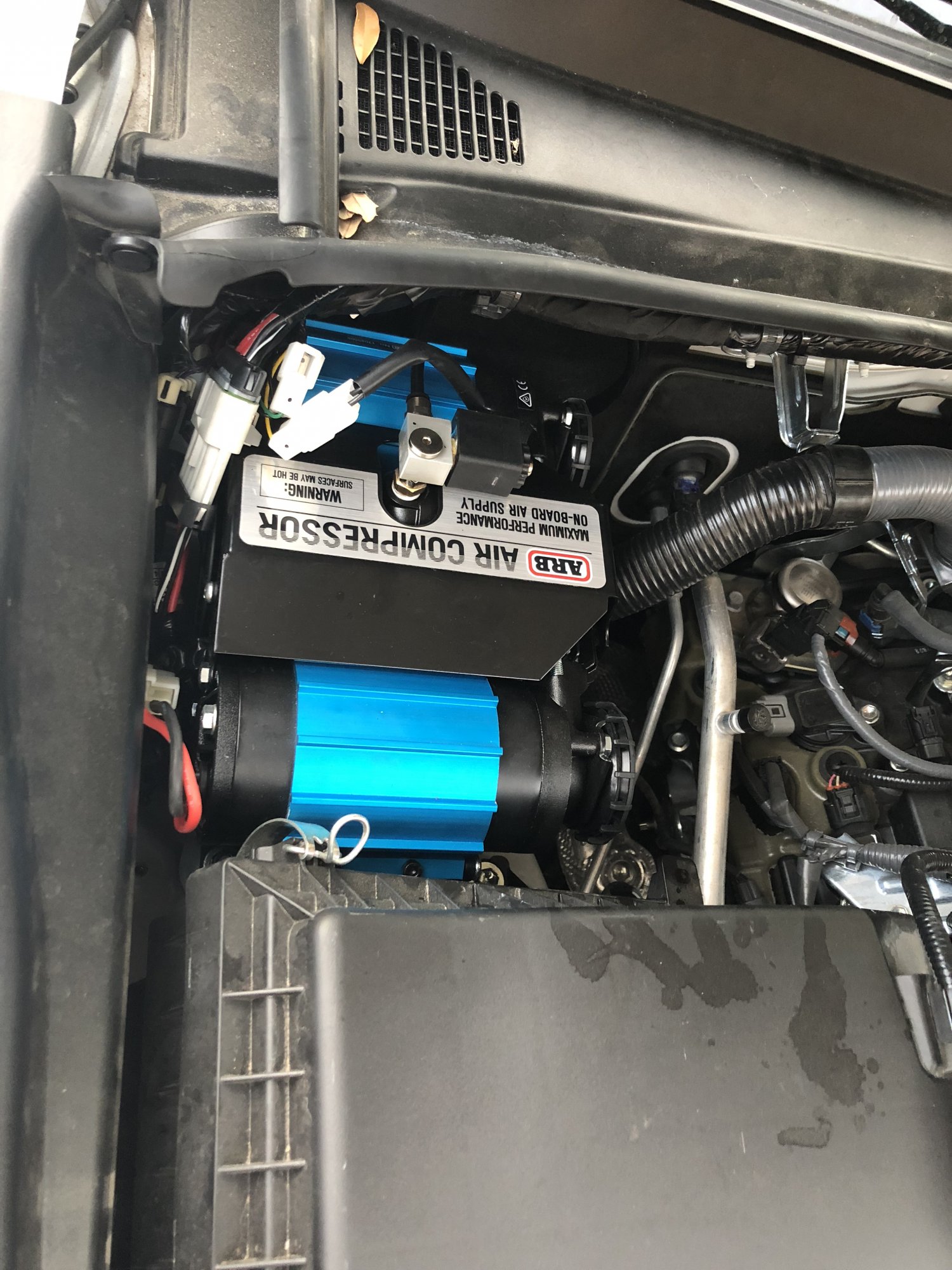 Some installed pics of the suspension: 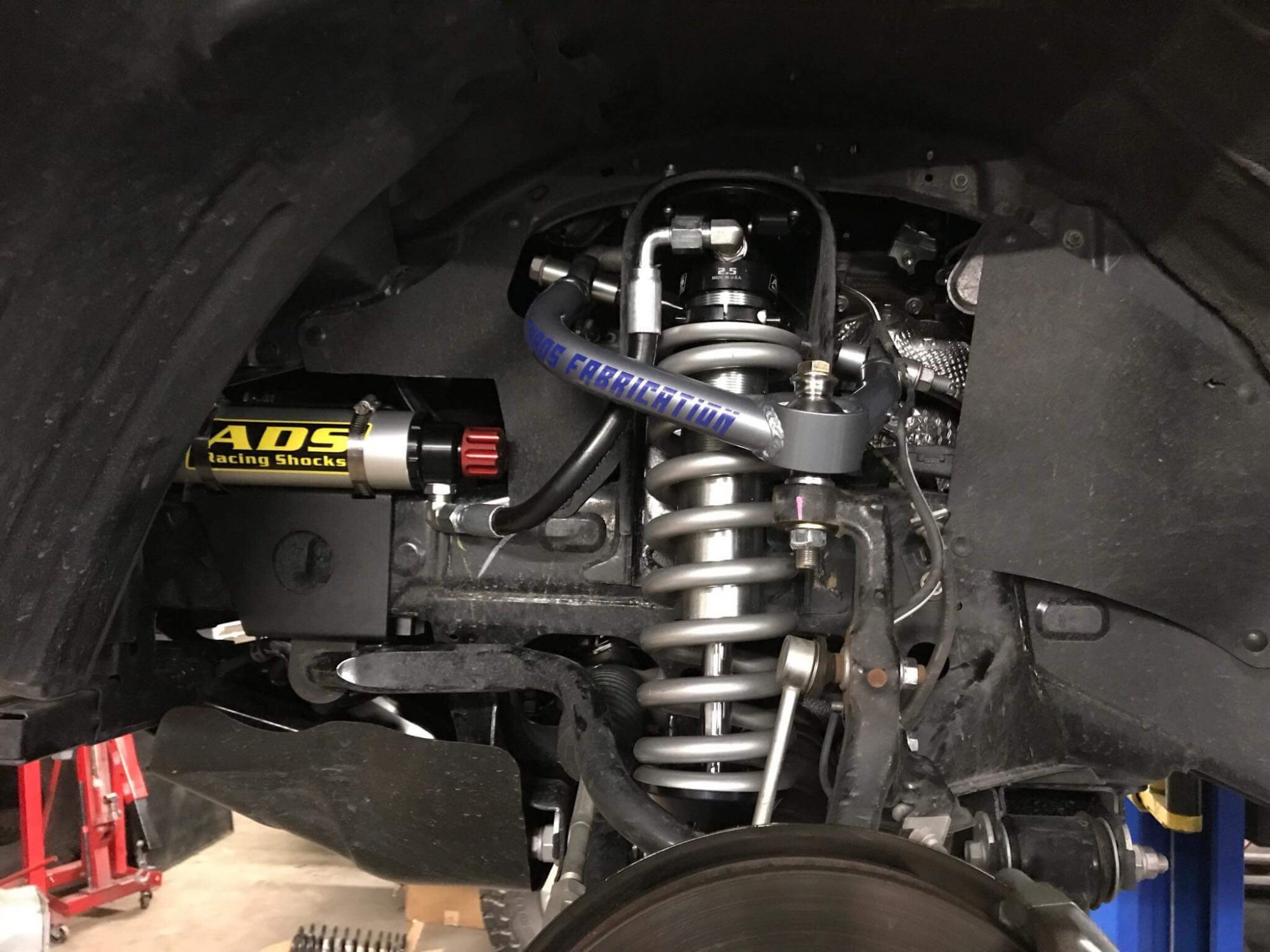 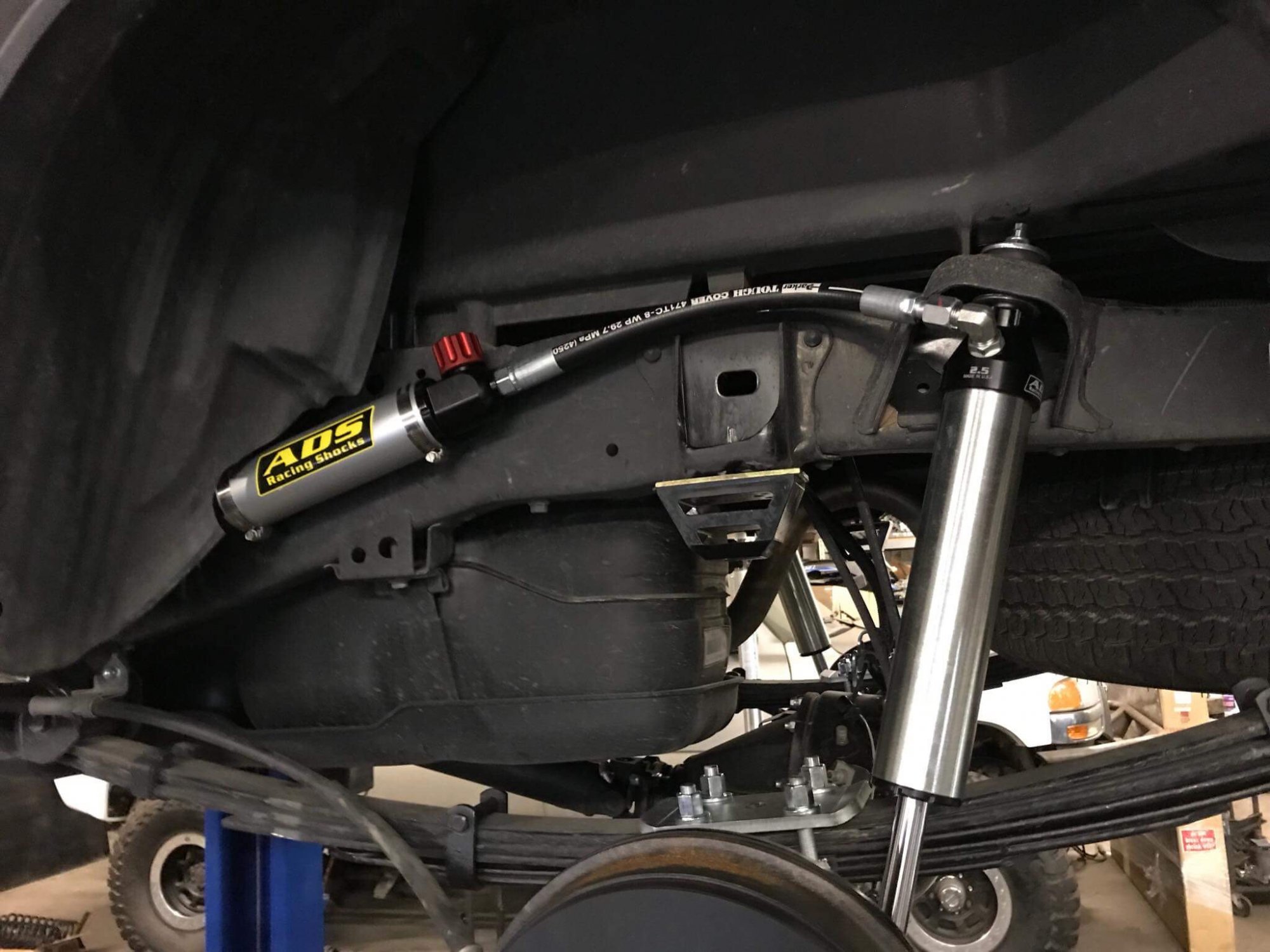 I haven't done too much to the truck since getting the gears and locker installed. I have a Switch Pros 9100 sitting at the house, waiting for some misc stuff to come in so I can install it and use it to run the compressor and locker. I also installed the Rigid lights from the Inferno truck. 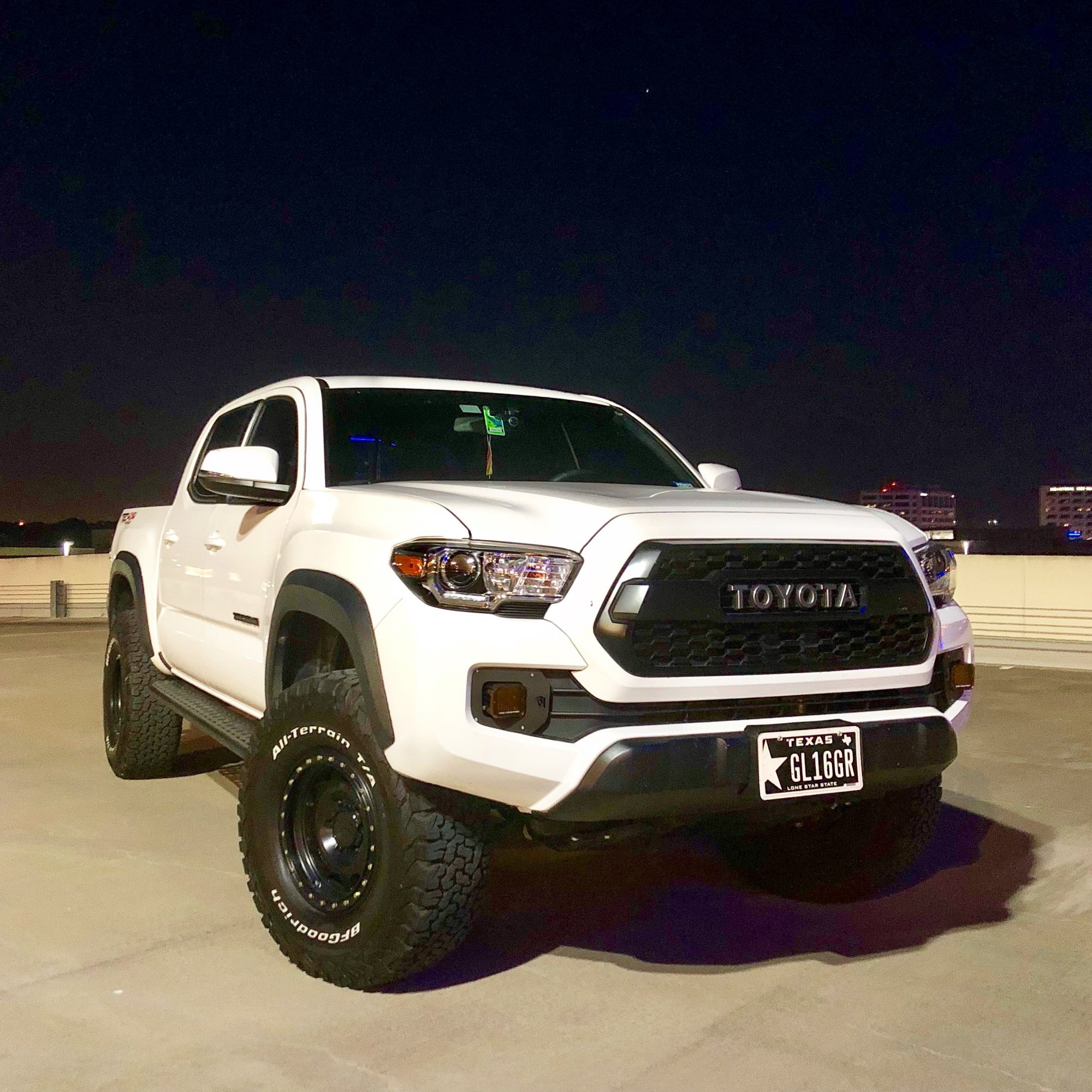 Welcome. I've heard nothing but good things about ADS. I think if I ever have enough funds I'll give them a go.

Some other minor stuff. After the accident in the Inferno truck, considering the at-fault driver did not have insurance, and considering my wife's 110 mile round-trip for school, we had Momento M5 1080p front and rear dash cams with GPS installed: 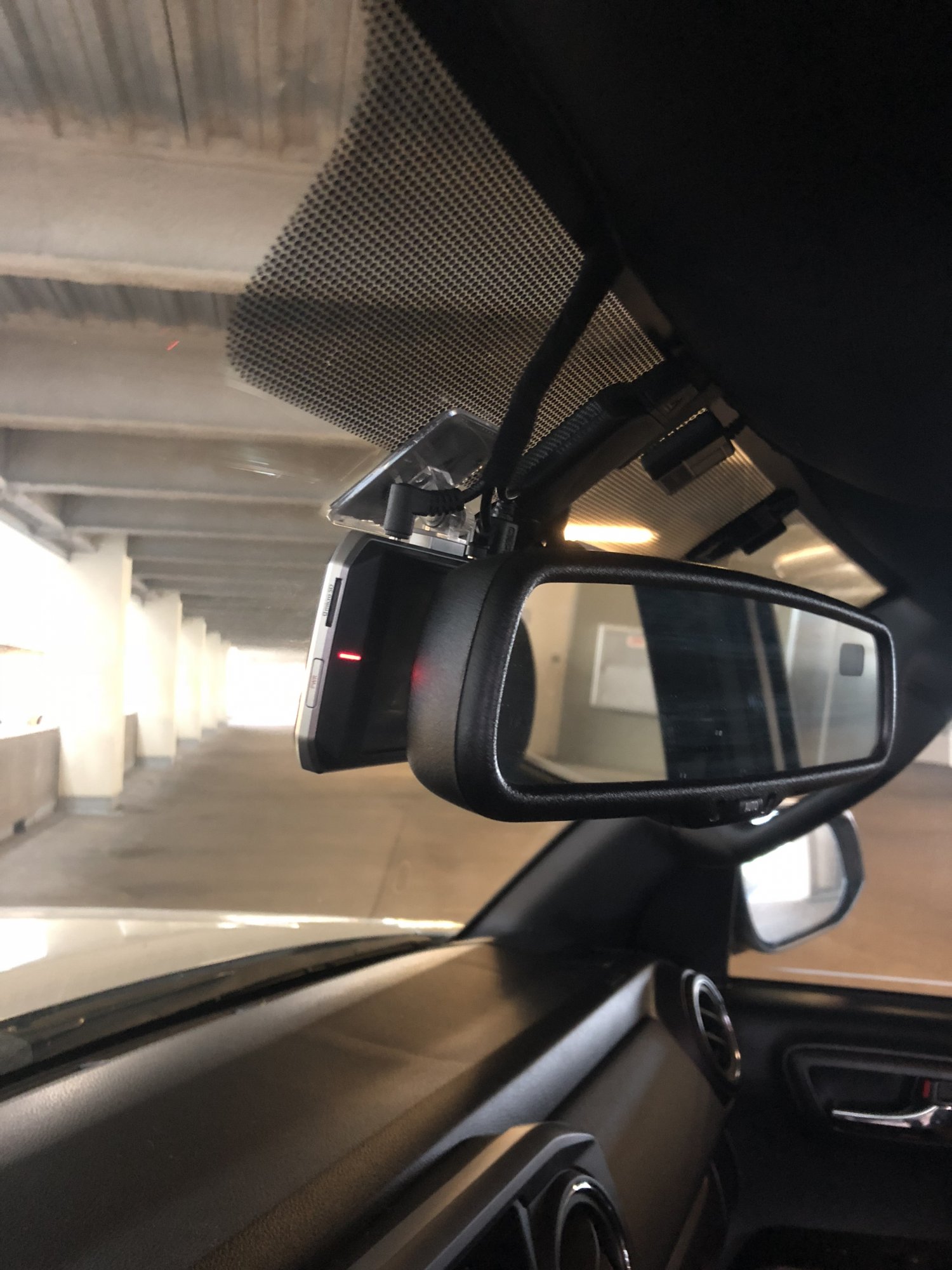 Also had a Compustar security system with remote start installed. Since we will use the ARB compressor for OBA as well as locker actuation, picked-up this handy kit: 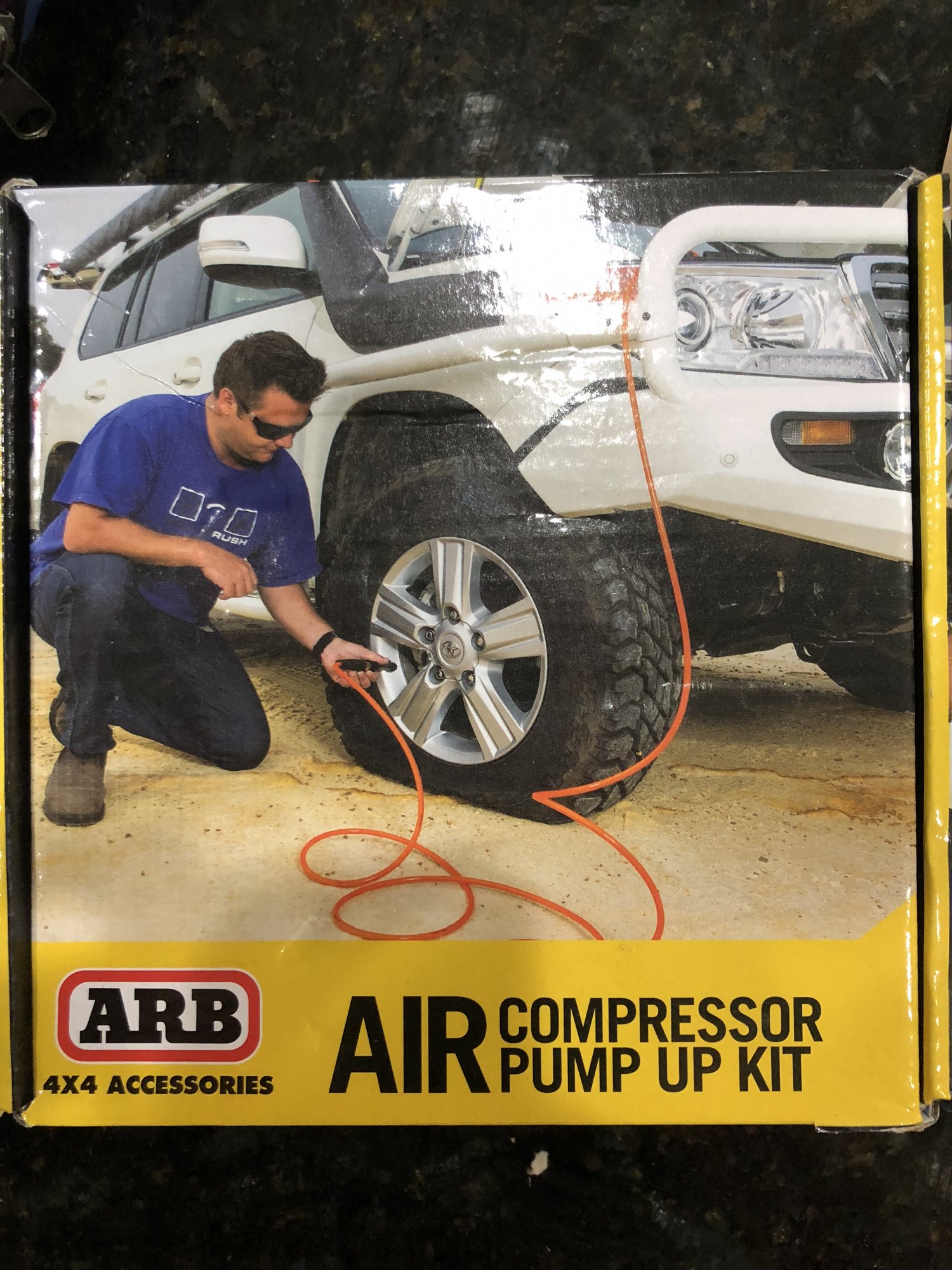 Forgot that we also picked up this accessory mount from BAMF. It will likely hold a shovel and some other misc. stuff. I plan to order his HiLift mounts for the driver's side of the bed. 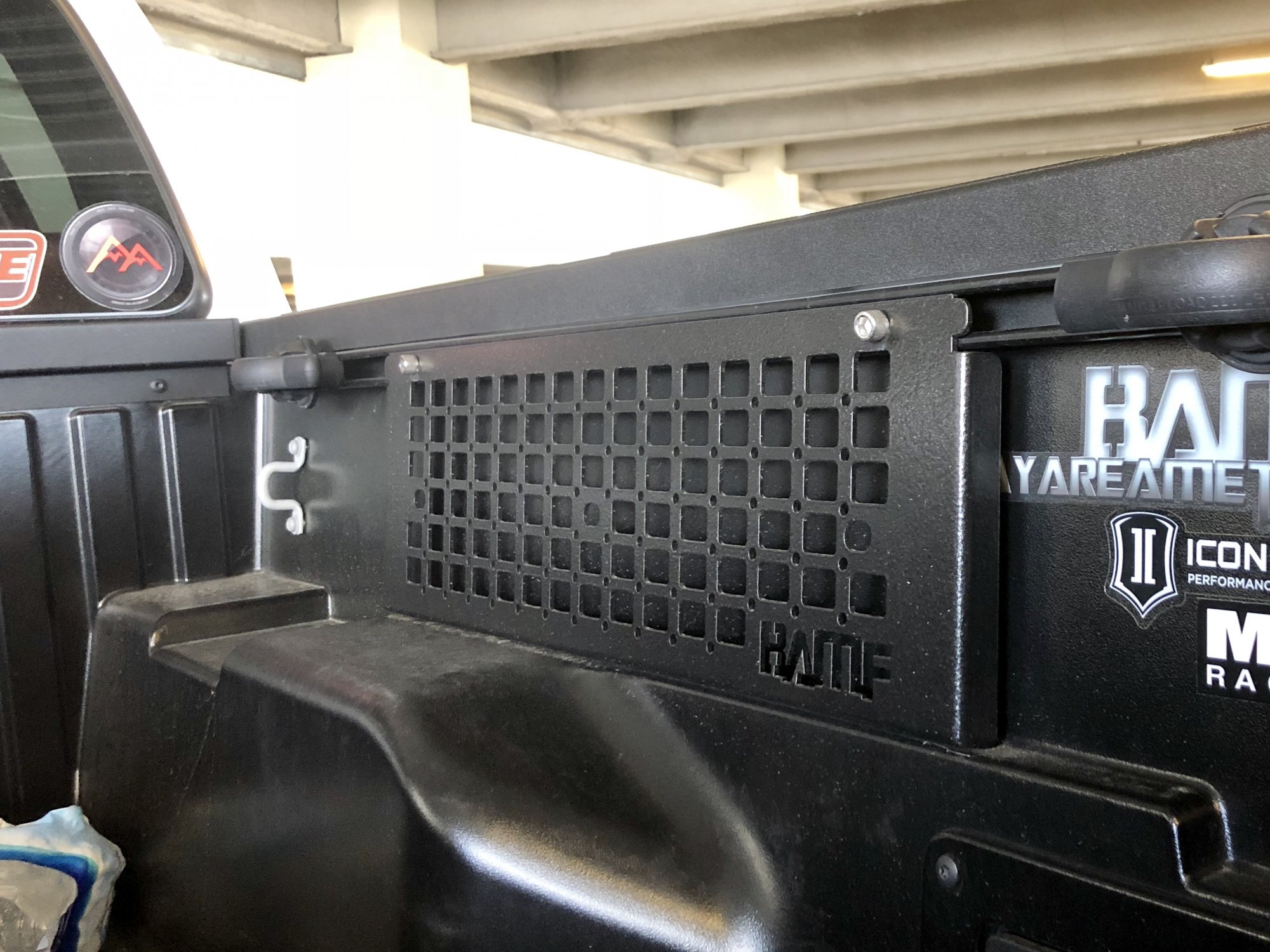 I'm still waiting for the misc. parts to show up to install the Switch Pros unit, and we have some additional recovery gear to buy. Otherwise, the truck is pretty much ready for CO in August.

Rob Daman said:
Welcome. I've heard nothing but good things about ADS. I think if I ever have enough funds I'll give them a go.
Click to expand...

Thank you! The ADS shocks are incredible. We're very happy with them.

Got everything I need to move forward with the Switch Pro install. Stay tuned! 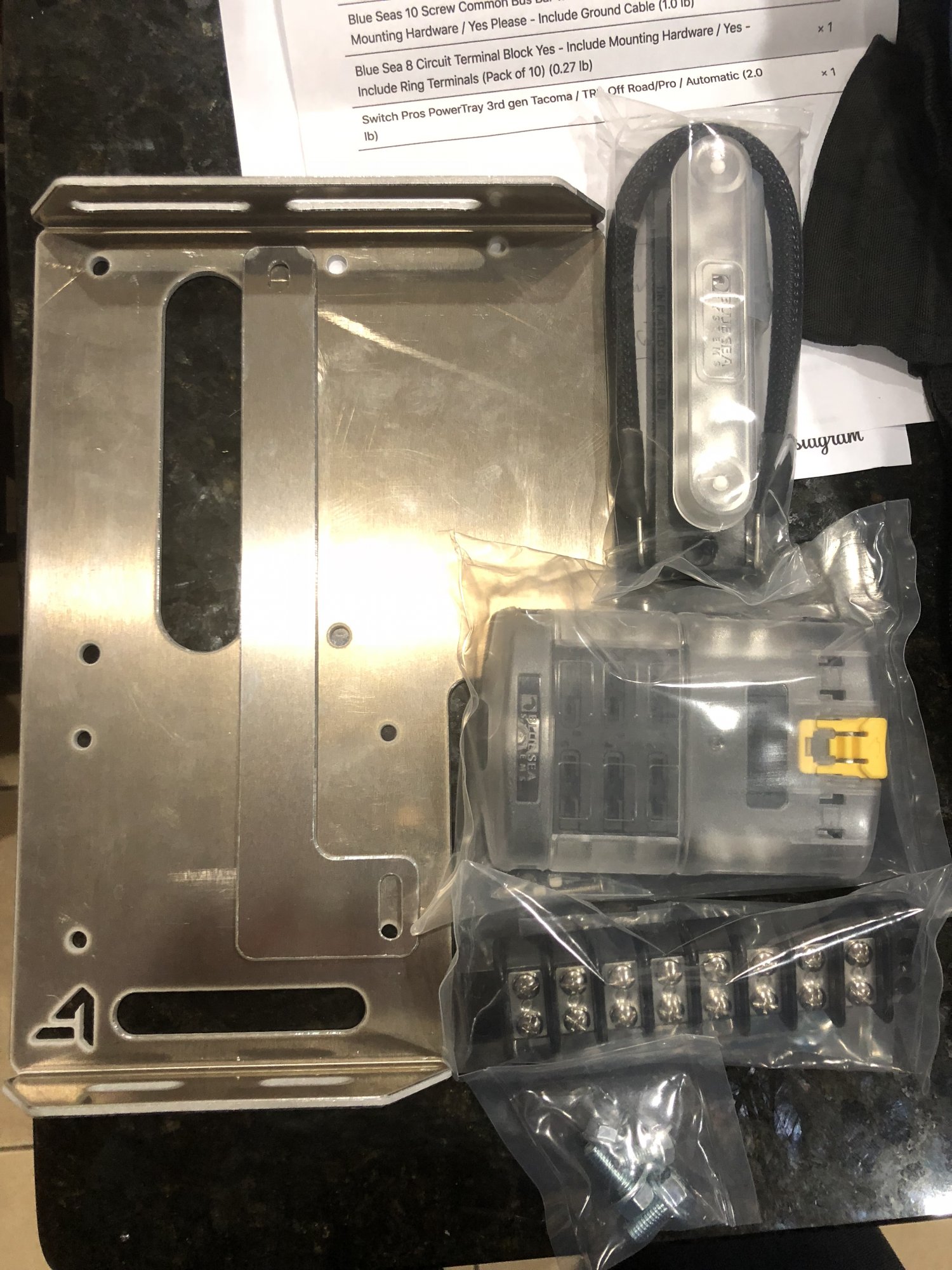 And, just for grins, a couple pics of our other project vehicles: 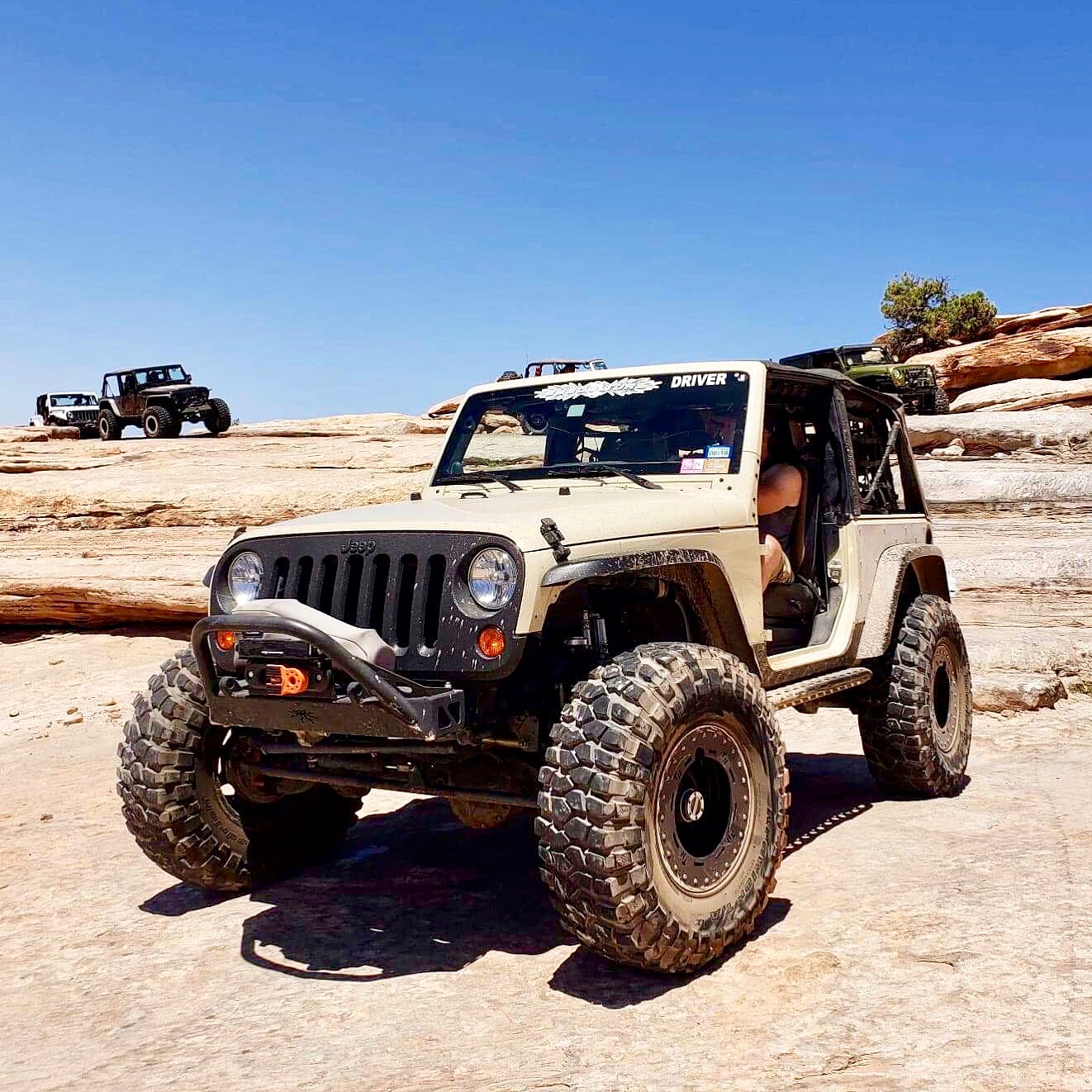 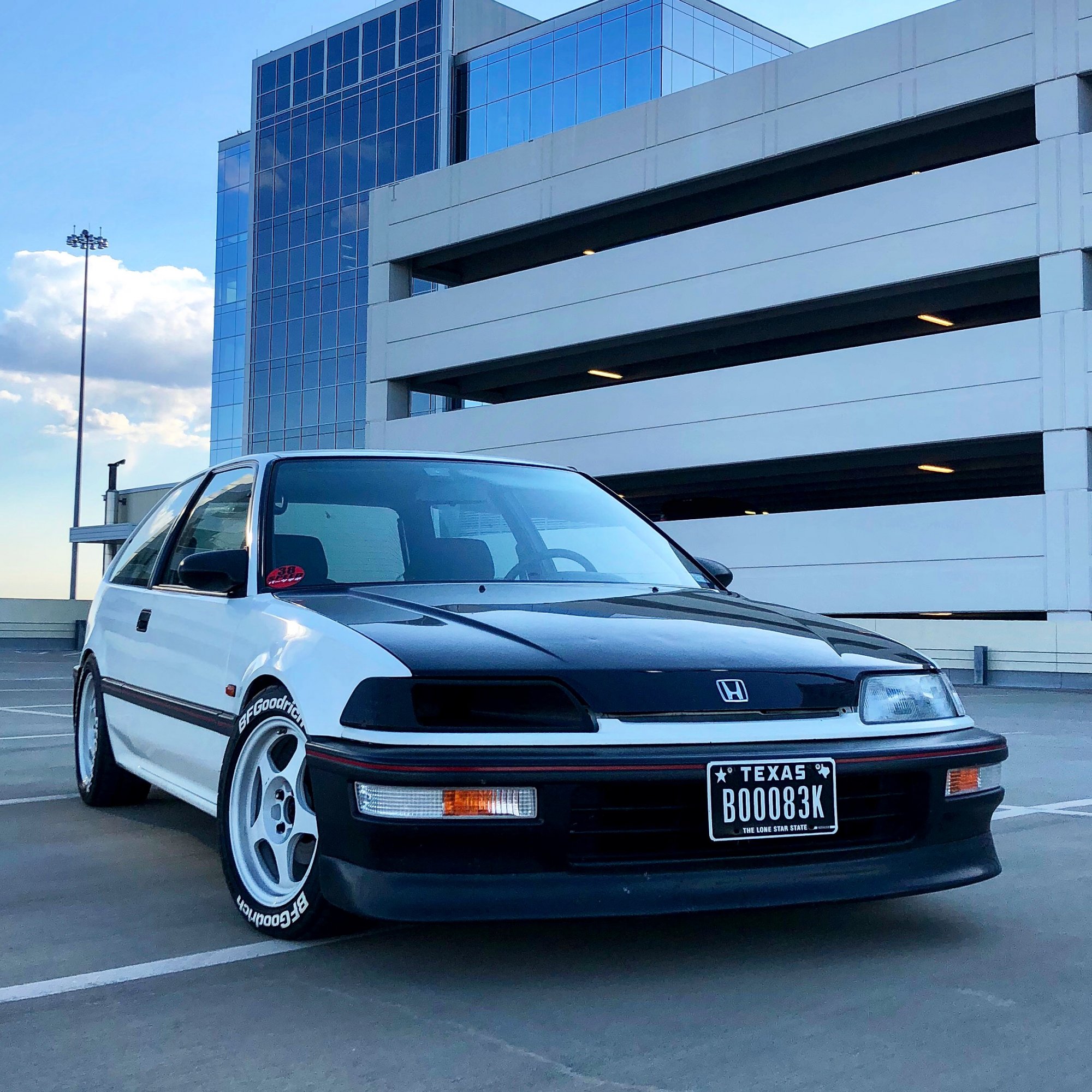